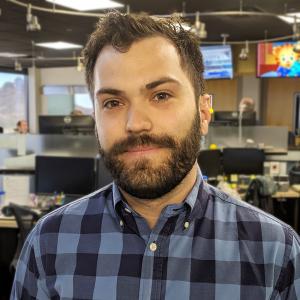 Scott Bourque is an award-winning journalist who specializes in long form storytelling. As a Phoenix native, Scott has a deep understanding of local and regional history, and how the issues facing communities in the region have evolved over time. He is passionate about issues of economic equality, housing and urban development, and military/veteran affairs. Scott is not only a reporter/producer for HearArizona Podcasts, he is also an adjunct professor of journalism at the Walter Cronkite School of Journalism and Mass Communication at Arizona State University. He is a graduate of Northern Arizona University and Arizona State University.

He has contributed to projects that have won multiple awards, including the Robert F. Kennedy Human Rights Award and a Rocky Mountain Regional Emmy. He served in the U.S. Navy from 2009 to 2014, including a deployment to Afghanistan. Scott began his work with Hear Arizona by producing the UnSheltered series on homelessness. He also put together a 5 podcast series on teacher shortages called, Education Cliff, and is using his first-hand knowledge as a veteran to produce a compelling insider’s view of leaving the military in a 10 podcast series on Becoming A Veteran.

State of the Arts Arizona

Episode 1: Where Have All The Teachers Gone?
Episode 2: Better Opportunities Elsewhere
Episode 3: Help Wanted
Episode 4: Teacher Diversity
Episode 5: The Cost Of It All

Discharged
Becoming A Veteran: A Conversation With Capt. Oliver
You Don't Look Disabled
Becoming a Veteran: Veterans In Politics
The Veterans' Experience from a Woman’s Perspective